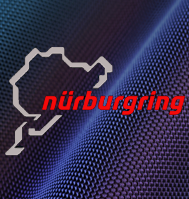 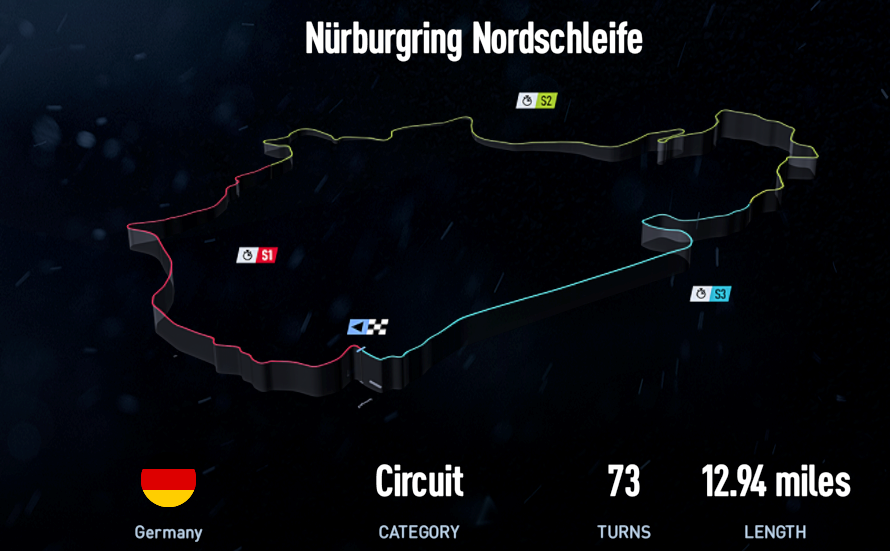 Description: Nordschleife racing today Several touring car series still compete on the Nordschleife, using either only the simple 20.8 km (12.9 mi) version with its separate small pit lane, or a combined 24.4 km (15.2 mi)-long track that uses a part of the original modern F1 track (without the Mercedes Arena section, which is often used for support pits) plus its huge pit facilities. Entry-level competition requires a regularity test (GLP) for street-legal cars. Two racing series (RCN/CHC and VLN) compete on 15 Saturdays each year, for several hours. In 2015 the World Touring Car Championship is scheduled to host the FIA WTCC Race of Germany at the Nordschleife as a support category to the 24h. Automotive media outlets and manufacturers use the Nordschleife as a standard to publish their lap times achieved with production vehicles. BMW Sauber’s Nick Heidfeld made history on 28 April 2007 as the first driver in over 30 years to tackle the Nürburgring Nordschleife track in a contemporary Formula One car. Heidfeld’s three demonstration laps round the German circuit in an F1.06 were the highlight of festivities celebrating BMW’s contribution to motorsport. About 45,000 spectators showed up for the main event, the third four-hour VLN race of the season, and the subsequent show by Heidfeld. Conceived largely as a photo opportunity, the lap times were not as fast as the car was capable of, BMW instead choosing to run the chassis at a particularly high ride height to allow for the Nordschleife's abrupt gradient changes and to limit maximum speeds accordingly. Former F1 driver Hans-Joachim Stuck was injured during the race when he crashed his BMW Z4. As part of the festivities before the 2013 Nürburgring 24 Hour race, Michael Schumacher and other Mercedes-Benz drivers took part in a promotional event which saw Schumacher complete a demonstration lap of the Nordschleife at the wheel of a 2011 Mercedes W02. As with Heidfeld's lap, and also partly due to F1's strict in-season testing bans, the lap left many motorsport fans underwhelmed. Nordschleife public access Since its opening in 1927, the track has been used by the public for the so-called ""Touristenfahrten,"" i.e. anyone with a road-legal car or motorcycle, as well as tour buses, motor homes, or cars with trailers. It is opened mainly on Sundays, but also many Saturdays and weekday evenings. The track may be closed for weeks during the winter months, depending on weather conditions and maintenance work. Passing on the right is prohibited, and some sections have speed limits. This Nürburgring is a popular attraction for many driving enthusiasts and riders from all over the world, partly because of its history and the challenge it provides. The lack of oncoming traffic and intersections sets it apart from regular roads, and the absence of a blanket speed limit is a further attraction. Normal ticket buyers on these tourist days cannot quite complete a full lap of the 20.8 km (12.9 mi) Nordschleife, which bypasses the modern GP-Strecke, as they are required to slow down and pass through a 200-metre (220 yd) ""pit lane"" section where the toll gates are installed. On busier days, a mobile ticket barrier is installed on the main straight in order to reduce the length of queues at the fixed barriers. Drivers interested in lap times often time themselves from the first bridge after the barriers to the last gantry (aka Bridge-to-Gantry or BTG time) before the exit. However, the track's general conditions state that any form of racing, including speed record attempts, is forbidden. The driver's insurance coverage may consequently be voided, leaving the driver fully liable for damage. Normal, non-racing, non-timed driving accidents might be covered by driver's insurance, but it is increasingly common for UK insurers especially to insert exclusion clauses that mean drivers and riders on the Nürburgring only have third-party cover only or are not covered at all. Drivers who have crashed into the barriers, suffered mechanical failure or been otherwise required to be towed off track during Touristenfahrten sessions are referred to as having joined the 'Bongard Club'. This nickname is derived from the name of the company which operates the large yellow recovery flatbed trucks which ferry those unfortunate drivers and their vehicles to the nearest exit.

Your message has been submitted.

Oh no! We have a misfire! Please leave us as much detail below as possible so we can tune things more effectively.

Oh no! We have a misfire! Please leave us as much detail below as possible so we can tune things more effectively.